You wouldn’t think that building a stock pond on your own property would be something that requires the approval of the United States Environmental Protection Agency (EPA) would you? One unsuspecting family in Wyoming found out just how far the EPA was willing to go in an effort to “protect the environment.” According to a recent article by FoxNews, the Johnson family, in Fort Bridger, Wyoming, built a small stock pond on their farm in order to support their small herd of livestock. The Johnson’s obtained state and local permits for the pond. After the pond was built, the EPA sent the family threatening letters and slapped them with a fine of more than sixteen million dollars, (i.e., $37,500 per day from the time the pond was built), for not having obtained permission from the EPA to build the pond on the their property. The EPA even demanded the stock pond be deconstructed.

Allegations of a Violation of the Clean Water Act

The EPA claimed it had authority to issue the fine because the Johnson’s pond is fed by a natural stream, and under the federal Clean Water Act, the EPA believed that the Johnson family should have obtained federal approval to build the pond and should have gotten a permit from the U.S. Army Corps of Engineers. According to the EPA, the Johnson pond was build by creating a dam on a creek and the act of building a dam on a natural waterway requires an Army Corps permit. The EPA also claimed that material from the Johnson’s pond was washing into other waterways. No other environmental problems with the pond were identified by the EPA.

In reality, the stock pond had been used for four years by the Johnson’s cattle and horses, and other wild animals have been known to drink from and use the pond. Fish have taken up residence in the pond, and that supplies food for other animals in the area. Birds and moose regularly visit the pond as well. These are all indications that the stock pond is good for the local environment. 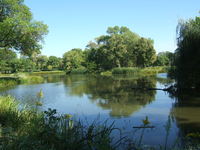 No Significant Nexus to Navigable Waters

The Clean Water Act gives the EPA jurisdiction over navigable waters. However, the Johnson stock pond not only is not navigable, but also, it does not drain into a navigable waterway. The Johnson pond drains into a man-made ditch that is used for agricultural purposes.

With the help of some good lawyers who donated their time, the Johnson family was able to negotiate the EPA’s demands down to an agreement whereby the Johnson’s will pay no fine, they can keep the stock pond, and they must plant a few willow trees and install a fence around part of the pond.

This unreasonable, overbearing and absolutely ludicrous enforcement effort by the EPA for a small pond on private property used for livestock purposes is not only absurd, it’s scary. It is yet another example of a federal agency gone wild. The Johnson family was lucky enough to have legal assistance to fight the EPA behemoth. Will the next family attacked by the EPA be as lucky?