In August 2020, the Energy Information Administration (EIA) issued the second part of its report on the Wolfcamp shale play of the Midland sub-basin section of the Permian Basin, which you can read here. The report is an interesting analysis of the geology of this area. The accumulations in the Permian Basin that became hydrocarbons were deposited during the Pennsylvanian through the late Wolfecampian geologic era while an inland sea covered this area. 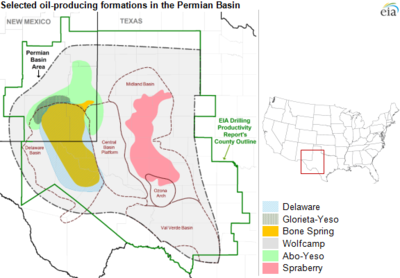 As many of you know, the Permian Basin has been producing for about 100 years. So far, it has produced more than 35.6 billion barrels of oil and about 125 trillion cubic feet of natural gas. Last year, this area accounted for more than 35% of total U.S. crude oil production. The EIA estimates that its reserves of oil and gas make the Permian one of the largest hydrocarbon producing basins in the world.

The Permian Basin contains three sub-basins: the Delaware, Central and Midland. The Wolfcamp play extends in the subsurface of all three of these sub-basins. It has been called the most prolific oil and gas bearing formation within the Permian Basin. The Wolfcamp formation is, in turn, divided into four sections, or benches, designated by A, B, C and D. Each bench differs in a number of ways, including its porosity and organic content. Since many areas of this play have very low permeability, production often requires multistage hydraulic fracturing.

The EIA indicates that it has access to more than 24,000 well logs from the Midland sub-basin, and from those logs they have constructed a series of fascinating maps reflecting the internal structure of the Wolfcamp play. The report, and especially the maps, make fascinating reading for anyone who owns mineral interests in the Permian Basin.