There was an interesting decision issued last fall by the US Supreme Court regarding government land use control and regulation, an issue that is always significant in Texas. The case is Koontz v. St. Johns River Water Management District, and the opinion illustrates some important limitations on government land use regulations. The five to four decision, with the majority opinion written by Justice Samuel Alito, holds that in land use regulation, the government must show a nexus and proportionality between what the government demands of the landowner and the effects of the landowner’s proposed new use of the land. The decision underscores a landowner’s rights to challenge government decisions regarding land use on a constitutional basis.

In this case, Mr. Koontz bought 14.9 acres of undeveloped land in Florida in 1972. Later in 1972, Florida passed a law called the Water Resources Act which required landowners to obtain a permit and commit that what they want to build would not damage water resources. Then in 1984, Florida passed the Henderson Wetlands Protection Act which required that landowners obtain still additional government permits. Mr. Koontz wanted to develop part of his land in the 1990s. He wanted to fill part of the land to make a storm water pond, and offered to offset the environmental impact of this fill by creating a conservation easement on the rest of his land. His plan was rejected by the St. John’s River Management District, so Mr. Koontz turned to the court system and sued for monetary damages for an unconstitutional taking.

The Florida District Court and Court of Appeals held that Florida had overreached due to the nexus and proportionality requirements. Their decision was based on two prior US Supreme Court cases, Nollan v. California Coastal Commission and Dolan v. City of Tigard, both of which used the “nexus” and “rough proportionality” standards. The Florida Supreme Court reversed the two lower court decisions, and indicated that the Nollan and Dolan principles didn’t apply to Mr. Koontz’s case. 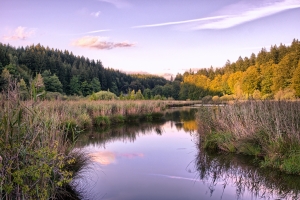 Justice Alito’s decision for the US Supreme Court reversed and remanded the Florida Supreme Court’s decision, holding that the nexus and proportionality tests from Nollan and Dolan must be satisfied when the government denies a permit request and when the government requires payment of money for approval of the permit. This part of the decision was unanimous. As to compensation for a taking under Fifth Amendment, the US Supreme Court held that issue must be determined by state law.

This decision by the US Supreme Court will certainly be relevant to state and federal permitting in Texas.

Changes to the Oil & Gas Industry in Texas, the U.S. and the World?