Currently, there is  a coordinated effort underway by a number of organizations to study and identify a possible connection between hydraulic fracturing (fracing) and a recent increase in seismic activity.

Some scientists have observed an increase in seismic activity in the central and eastern regions of the United States, as shown in the graphic below. Scientists with the U.S. Geological Survey have been documenting the number of earthquakes of Richter Scale 3.0 or larger and have noted an increase in the number of earthquakes. There have been more than 100 earthquakes a year on average in the last four years, up from 20 a year between 1970 to 2000. California in particular has experienced an increase in seismic activity. After a relatively quiet period of seismic activity in the Los Angeles area, the last five months have been marked by five earthquakes measured larger than 4.0. That hasn’t occurred since 1994, the year of the destructive Northridge earthquake that produced 53 such temblors. In the two decades subsequent to the Northridge earthquake, there were some years that passed without a single quake of 4.0 or greater.

One of these organizations exploring a potential link between fracing and seismic activity is the U.S. Energy Association. Their main focus is on determining the quality and availability of information. With so much misinformation in the media, it is easy for mistaken assumptions to be published just to score a political point. 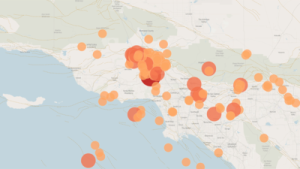 Hydraulic fracturing is a well-stimulation technique in which rock is fractured by a hydraulically pressurized liquid. A high-pressure fluid (generally sand or another “proppant” suspended in water) is injected into a well bore to create cracks in the deep-rock formations through which natural gas, petroleum, and brine will flow into the well bore more freely. Hydraulic fracturing technique is commonly used in wells for shale gas, tight gas, tight oil, and coal seam gas.  Similar fractures occur in rocks naturally and are called veins or dikes. However, concerns over the artificial hydraulic fracturing have been voiced due to observations of increased seismic activity along or near fracing sites.

Some scientists are skeptical of claims that the increase in seismic activity is due solely on fracing. Other activities, such as dewatering, are also thought to be a major cause of the spike in earthquakes and ground disturbances. “Not all the (seismic) activity is related to hydraulic fracturing,” noted William Leith, the US Geological Survey’s senior science advisor for earthquake and geological hazards. “A lot has to do with stripping and dewatering. Production waste fluid injections have caused more quakes in the U.S. than fracing. Not having good injection data is a real problem.”

The U.S. Department of Energy is reportedly partnering with researchers in the private sector, including ExxonMobil.  A major focus of their efforts will be to identify possible tectonic areas that are prone to slipping.

The jury is still out regarding the relationship, if any, between fracing and the observed increase in seismic activity. The fact-finding efforts will hopefully add to our knowledge, and give us hard facts upon which to base policy decisions regarding  the oil and gas industry.