Last year was a tough year for oil and gas companies. Houston based Schlumberger announced that it was laying off 9,000 workers. Range Resources cut its 2015 capital budget to $870 million. Other oil producers have cut rig production in response to the price declines. Concho Resources, a major producer in the Permian basin, recently cut its 2015 production by a third. Pioneer Natural Resources converted its derivative contracts to a fixed-price swap, to shield itself from the declining market. “Demand for rigs is falling off the cliff” said Joseph Triepke, a financial analyst and managing director of Oilpro. Finally, we have seen a number of oil and gas companies filing bankruptcy, as they find themselves unable to meet their lender’s demands for additional collateral in response to the shrinking value of the borrower’s reserves.

Its a frightening time for employees too. While the oil industry has added about 150,000 jobs over the last three years, the current pace of layoffs may outstrip the hiring. Each drilling rig represents about 100 jobs, from field hands to maintenance workers. The current rig count is down substantially. Oil companies are cutting exploration at exponential rates. Mr. Triepke surmised that this may mean that the three biggest  land rig companies- Helmerich & Payne, Nabors Industries and Patterson-UTI Energy – are “likely to cut approximately 15,000 jobs out of the 50,000 people they currently employ.”

Local economies may be devastated. Take the extreme example of Sweetwater, Texas. Two years ago Sweetwater was to herald a new age of industry due to the nearby Cline Shale. 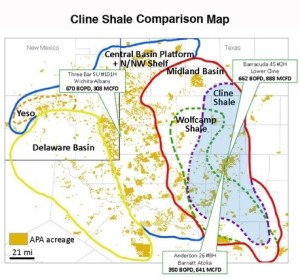 There were plans to convert the town from the site of the annual Rattlesnake Roundup to a major player in the hydraulic-fracturing boom. Devon Energy triggered a flurry of leasing activity when it announced that it estimated that the Cline Shale held 30 billion barrels, six times the size of the Bakken Shale in North Dakota. The University of Texas at San Antonio predicted that the Cline Shale would bring $20 Billion to the region. Citizen optimism led to remodeling of the courthouse and the law enforcement center. Even the hospital planned $31 million in upgrades. But the recent falling oil prices have spooked investors. Now the 11,000 people of Sweetwater await layoffs and budget cuts.

In a rather un-Texan-like way, Devon quietly let itself out the back door. It let its oil and gas leases expire. A Lubbock newspaper said that “(t)here was no mention of the Cline in Devon’s third-quarter financial report filed in November with the Securities and Exchange Commission. Two months earlier, Devon’s financial partner, Japan’s Sumitomo Corporation, took a $1.55 billion write-down on its Cline investment.”

Clearly, the contraction in oil and gas prices, the layoffs and the economic repercussions are not going away anytime soon. By most indicators, it appears that 2016 will be another very tough year for the oil and gas industry.

Life for Oil and Gas Wells in Tyler County and Duval County, Texas