Good news for Texas mineral owners and the Texas oil and gas industry in the form of more investment in our shale resources! An new oil and gas company out of Fort Worth, Texas, Titan River Energy, has announced they will use $100 million from a capital commitment to drill and develop in Texas’s oil shales. Titan River gets its name, according to Charles “Chip” Simmons Jr., Titan River chief executive officer, from the largest of Saturn’s moons, “the only place other than Earth where we’ve discovered [liquid] hydrocarbons.” Mr. Simmons said, “One of the things that differentiates Titan River is we’ve got all the capability to not only pursue land acquisitions but also geologic assessments, drilling, completion and operations.” 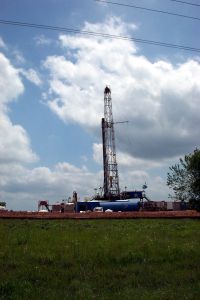 The $100 million for this new investment was provided by Ridgemont Equity Partners of North Carolina and Post Oak Energy Capital of Houston. Titan River will also invest an undisclosed amount in the project. Titan River has already leased 2,500 square feet of office space in downtown Fort Worth for a corporate headquarters and another office in The Woodlands.

Titan River has most recently focused on Eagle Ford Shale, but the company is interested in the Wolfcamp Shale as well. The company is looking statewide in Texas for possible production locations. Lee Matthews, the Chief Operating Officer and President of Titan River, hinted they may expand outside Texas. He has said that “We’re not totally limited to Texas, but our preference is to get started in our home state.” Mr. Simmons has been quoted as saying that the focus will be on converting acreage into reserves through drilling joint ventures, farm-ins and leasing opportunities. Mr. Matthews told reporters that starting an upstream operating oil and gas company was a lifelong goal. The management team includes Don Pearce, executive vice president of drilling operations; Kent Bowker, executive vice president of geology; and Brennan Potts, vice president of land and business development.

Both investment firms expressed excitement at the opportunities of the new company. John Shrimp from Ridgemont said, “We have known these guys, Chip and Lee, for a pretty long time and felt like the team was a really attractive team with complementary skills that could take advantage of the oil and gas marketplace.” Ryan Mathews with Post Oak said, “Other companies don’t have the full suite of disciplines necessary for full development.” Between Mr. Simmons, Mr. Matthews, and the rest of the management team they have put together, they have a proven track record of experience in geological assessment, drilling, and have between them completed over 400 horizontal wells in major shale plays, with particular experience in Eagle Ford.

Mr. Matthews said, “We expect to grow, and when we do, we’ll need more specialists and will move.” It sounds like this company is already talking about expansion, even though it is just starting out. Such confidence in Texas’s energy industry portends economic stability and growth for Texas.