My readers know that I am generally supportive of oil and gas companies, although in my practice, I represent only Texas land, mineral and royalty owners. Smart development of Texas mineral resources has significant benefits for Texans and the country through cheaper fuel, energy independence, and economic growth. But this week, a proposed House bill in the Texas legislature that is undoubtedly sponsored by an oil company really makes me see red!

The bill that has angered me, and many other Texas residents, is House Bill 1496, now in the Land and Resources Management Committee. The bill would amend the Texas Government Code, Title 10 Subtitle A Sections 2007.002 and 2007.003. This portion of the Government Code regulates the taking of private property by government action, such as in the case of eminent domain for a public purpose (think of a county condemning property for a new road). The proposed amendment provides that ordinances or regulations by cities or counties that attempt to regulate oil and gas drilling and production within the city limits or county limits will be considered a government taking of a private property right. 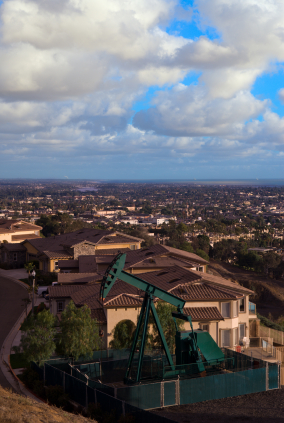 On first blush, you may ask, why is that a problem? Consider this: There may be cities or counties within Texas that, from time to time, create restrictions so severe that all oil and gas drilling and production activity is effectively prohibited. However, most of the regulations I am aware of are eminently reasonable. For example, many city or county regulations prohibit oil wells and compressors in residential areas or next to schools. There are good reasons for this. The noise and smell of an actively pumping oil well with an above ground pump, or the noise and smell of a compressor used on a gas well (especially one without a hospital muffler), are substantial. No one could sleep or have any peace near these activities. Secondly, no matter how high the fencing around pumps and other oilfield equipment, they are going to be an attractive nuisance for kids and teenagers and serious injuries or death may result. Thirdly, the location of these activities near homes is going to result in a substantial decrease in the value of those properties. Finally, local cities and counties who have drilling and production activity in residential areas forced upon them are going to find that the diminished value of those homes is going to decrease their tax revenues at a time when they are already struggling.

The real world impact for Texans if this bill passed is that it will be easier for oil and gas companies to challenge local ordinances that regulate the location of oil and gas wells near communities. In other words, cities and towns across Texas would be vulnerable to litigation from oil and gas companies if city or county regulations (for example, regulating the location of drilling or storage facilities) prevent an oil company from earning what they believe to be the full value of the minerals they have purchased or leased. That loss would be considered a “taking” and therefore the companies could sue the cities or towns for the value of what they supposedly “lost.” The problem here is this: petroleum engineers argue all the time about what the reserves are for a producing oil or gas field. For a field that has not produced yet, it’s anybody’s guess. It will come down to a battle of expert witness opinions at the courthouse.

Oh really? This statement is superficial and not based on fact. What makes Representative Taylor’s position particularly egregious is that current horizontal drilling and fracing technology makes this bill unnecessary. The local ordinances protecting the value of property and the peace and health of city and county residents are really not preventing mineral owners and oil and gas companies from their profits!

The final problem with this bill is that oil and gas companies who believe that the regulations of a city or county effectively prohibit them from producing their mineral interests already have a remedy. They can bring suit for damages due to what is called “inverse condemnation”. Thus, they don’t need this additional club in the form of House Bill 1496 to beat on already distressed cities and counties.

Please add your voice to stop passage of House Bill 1496. Contact your elected officials and voice your opposition. If you don’t know who represents you, find out here. In addition, call, email or write Representatives Taylor and Elkins, who are sponsoring this bill, and tell them of your opposition. Finally, call, email or write the members of the Land and Resources Management Committee in the Texas House and let them know you are opposed to this bill and that it should never leave committee. The contact information for these individuals is: