The Texas Eleventh Court of Appeals decided yet another “continuous development” case in which the lessee tries to wiggle out of its obligations under the oil and gas lease with a strained interpretation of the lease terms (although in this case, both the lessor and the lessee were oil companies).

END_OF_DOCUMENT_TOKEN_TO_BE_REPLACED

The Texas Court of Appeals in El Paso, in HJSA No. 3, Ltd. P’ship v. Sundown Energy LP,  issued a decision siding with the landowner on the interpretation of an oil and gas lease regarding the meaning of “continuous development“.

7(b). The first such continuous development well shall be spudded-in on or before the sixth anniversary of the Effective Date, with no more than 120 days to elapse between completion or abandonment of operations on one well and commencement of drilling operations on the next ensuing well.

END_OF_DOCUMENT_TOKEN_TO_BE_REPLACED

[Neuhoff Oil] does hereby assign, sell and convey unto [Piranha] . . . without warranty or covenant of title, express or implied, subject to the limitations, conditions, reservations and exceptions hereinafter set forth . . . all of [Neuhoff Oil’s] right, title and interest in and to the properties described in Exhibit “A” (the “Properties”)

END_OF_DOCUMENT_TOKEN_TO_BE_REPLACED

The Texas rule against perpetuities (the “Rule”) was something all lawyers learned about in law school, but it seemed at the time like a concept we would not run into very often in real life law practice. Unfortunately, it comes up regularly in connection with Texas oil and gas leases and related interests.

In Texas, the Rule states that a property interest must vest within 21 years after the death of some life or lives in being at the time of the conveyance of that property interest. If it does not, then the interest is a perpetuity. Perpetuities are prohibited by Texas Constitution Article 1, section 26 as restraints on free alienation of property. A conveyance that violates the Rule is void.

In Tommy Yowell v. Granite Operating Company et al, the Texas Supreme Court had occasion to review a claim that an overriding royalty interest (ORRI) violated the Rule. As many of you know, an ORRI is a share of either oil and gas production or revenue from that production that is carved out of a lessee’s interest under an oil and gas lease. In most cases, when the oil and gas lease to which the ORRI is attached terminates, the ORRI terminates as well. In this case, the ORRI contained a provision that purported to cover any extension or renewal of the existing lease as well as any new leases. When the operator of a new lease stopped paying royalties to Yowells, they sued.

END_OF_DOCUMENT_TOKEN_TO_BE_REPLACED

The Texas 14th Court of Appeals recently interpreted a pipeline easement and that interpretation may have application for many other pipeline easements in existence in Texas. The case is Texas Land & Cattle II, Ltd. v ExxonMobil Pipeline Company.

Texas Land & Cattle (TLC) owned real property in Harris County, Texas. ExxonMobil owned a pipeline easement across this property. ExxonMobil was the successor in interest to Humble Oil Company who originally obtained the easement. The easement granted the right to operate a pipeline for the “transportation of oil or gas”. The easement did not define oil or gas.

END_OF_DOCUMENT_TOKEN_TO_BE_REPLACED

In 1975, Neuhoff Oil & Gas purchased an undivided two-thirds interest in a mineral lease known as the Puryear Lease. The lease was between the Puryears (and others) as lessors and Marie Lister as the lessee. The lease covered all of the minerals under a tract of land referred to as Section 28. A few years later, Neuhoff Oil sold and assigned its two-thirds interest, but reserved for itself a 3.75% ORRI on all production under the Puryear Lease. An ORRI is an interest that is created out of the working interest (the oil company’s or operator’s interest) in the lease. It is a fractional, undivided interest with the right to participate or receive proceeds from the sale of oil and/or gas. It is not an interest in the minerals, but an interest in the proceeds or revenue from the oil & gas minerals sold. The interest is limited to a specific tract of land and is bound by the term of the existing lease. If the underlying lease expires, the ORRI expires.

Only one well was completed on the property, the Puryear B #1-28. At some point, Neuhoff Oil & Gas sold its ORRI to Piranha Partners. A bit later, Neuhoff Oil & Gas went out of business and assigned its assets to individual members of the Neuhoff family.

END_OF_DOCUMENT_TOKEN_TO_BE_REPLACED

The Commissioners of the Texas Railroad Commission recently voted unanimously to amend Rule 3.40, which has to do with the assignment of acreage to pooling and proration units. The current rule provides that “… acreage assigned to a well for drilling and development, or for allocation of allowable, shall not be assigned to any other well or wells completed or projected to be completed in the same field; such duplicate assignment of acreage is not acceptable”.  According to the Commission’s press release:

The rule restricted exploration in unconventional fracture treated (UFT) fields when oil and gas mineral ownership is divided at different depths below the surface. A UFT field is a field in which horizontal drilling and hydraulic fracturing must be used to recover oil and gas. To take advantage of technological advances that can tap into once inaccessible hydrocarbon resources in UFT fields, Commissioners voted to allow assignment of acreage to multiple wells in these fields. This rule revision will further protect mineral owner interest and allow access to additional resources.

The amendment to Rule 3.40 will probably result in increased drilling and production in fields where there is multiple ownership at different depths below the surface of the property. That means there will be increased royalties for mineral interest owners.The amended rule goes into effect on March 3, 2020

I recently had occasion to review the Texas Supreme Court’s decision on a long-running dispute between BP America and Laddex, Ltd. The case is centered around a disagreement of the terms in a decades old lease and its result has been significant for the energy industry. The case, known as  BP America Production Co. v. Laddex, Ltd., began in 2007. British Petroleum America (BP) had been producing out of a single well on property in Roberts County, Texas since 1971, however Laddex believed BP’s lease expired and signed a top lease with the mineral owners.  BP believed they still had rights to the land and so Laddex filed suit.

This case reached the Texas Supreme Court after both the initial jury and the Court of Appeals in Amarillo, Texas ruled in favor of Laddex. However, BP argued that the jury’s findings were incorrect as there was not sufficient evidence to support the jury’s verdict. BP also contended that Laddex’s lease is void under the Texas rule against perpetuities. Laddex argued that BP’s well had not been producing “payable quantities of oil” for 15 months and therefore any “prudent operator” would have halted all operations. Thus, according to Laddex, the terms of the BP lease stated that should BP’s production stop, the lease would be terminated and the rights given back to the lessor, allowing Laddex the right to sign a new lease and assume operations on the property.

END_OF_DOCUMENT_TOKEN_TO_BE_REPLACED

Recently the Texas Supreme Court decided an interesting case in which it examined whether a will had given a surface estate or a mineral estate to the beneficiaries of the will. In ConocoPhillips et al v. Leon Oscar Ramirez Jr. et al,  the testatrix, Leonor Juan, executed a will in 1987 and died the next year. The will devised a life estate in “all of [her] right, title and interest in and to

Ranch ‘Las Piedras’”to her son Leon Oscar Sr. with the remainder to his living children in equal shares and devised the residual of her estate equally to her three children, Leon Oscar Sr.,

Ileana, and Rodolfo. In this case, Leon Oscar Sr.’s children claim that Leonor’s residual estate did not include the mineral interest in Las Piedras Ranch but that it passed to Leon Oscar Sr. as part of his life estate.

END_OF_DOCUMENT_TOKEN_TO_BE_REPLACED 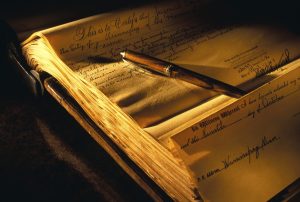 Texas has been, unfortunately, home to a number of oil and gas scams over the years. One of the most common is the company who wants to buy your mineral interests and who has you sign a deed before they pay you. Once they have a signed deed in hand, they then decide that your minerals are worth much less than what they originally offered, and they send you a check for a fraction of the purchase price they originally offered.

A more recent scam is the use of “oil and gas royalty leases”. The document the scammers ask you to sign is designed to look like an oil and gas lease and it is actually worded as if it were an oil and gas lease. For example, they often call the purchase price a “bonus”. In fact, the document is a deed for your nonparticipating royalties. Of course, nonparticipating royalty owners cannot sign leases, as a matter of law, but many people do not know this.

I have heard that the scammers in one case admitted that their so-called royalty lease was purposely designed as a lease instead of as a deed because people were afraid to sign deeds but would more readily sign leases.