The Texas Supreme Court recently weighed in on this issue in UDR Texas Properties LP et al. v. Alan Petrie. In this case, Petrie was waiting for a coworker at The Gallery apartment complex, which is owned by UDR Texas Properties. Petrie was attending a party at the apartment complex, but needed to be let into the gated facility and so was in the process of calling someone to give him access.  The visitor parking area was not gated. While he was on the phone, a vehicle pulled up behind Petrie’s vehicle and blocked him in. Two men exited the vehicle and pointed a rifle at Petrie, telling him to get out of the car and to give up his wallet and keys. When Petrie did not get to the ground fast enough for his assailants, the gunman shot Petrie.

END_OF_DOCUMENT_TOKEN_TO_BE_REPLACED

With so many new oil and gas pipelines being constructed presently in Texas, the Texas Supreme Court’s timing for additional guidance on when a pipeline company is a common carrier in the case of Denbury Green Pipeline-Texas L.L.C. v. Texas Rice Land Partners Ltd, et al. could not be more appropriate. A second opinion in that case focuses on when a pipeline company can be considered a “common carrier”, a status that grants the company the right to exercise eminent domain powers.

The Denbury Pipeline case has been making its way through the Texas court system for a number of years and this is not the first time that some aspect of the case has been heard by the Texas Supreme Court. In 2012, in Texas Rice Land Partners Ltd, et al v. Denbury Green Pipeline-Texas L.L.C.,  the Texas Supreme Court articulated a standard based on the Texas Natural Resources Code to determine when a pipeline company can have common carrier status. The standard or test is referred to as the Texas Rice I test. At the time, the Texas Supreme Court did not apply the test to the facts of the case, but instead reversed and remanded the case to the trial court for proceedings consistent with the common-carrier test it established, thus “affording Denbury Green the opportunity to produce reasonable proof of a future customer, thus demonstrating that [the pipeline] will indeed transport to or for the public for hire and is not limited in [its] use to the wells, stations, plants, and refineries of the owner.”

Test Under Texas Rice I

END_OF_DOCUMENT_TOKEN_TO_BE_REPLACED

The Texas A&M School of Law, in Fort Worth, Texas will be hosting the Eighth Energy Law Symposium on March 23 and 24, 2017.

The energy industry in the United States and globally is facing multiple transitions and fluctuation. The downturn in the oil market ha​s caused numerous bankruptcies; OPEC recently agreed to reduce production; the US is now a net exporter of gas and refined petroleum products; energy from renewable sources in the US now surpasses ​16 percent of total generation; and the Trump presidency promises to create new opportunities and challenges for the industry.

In assessing these factors and projecting where the global energy regime might go, Texas A&M University will host the 2017 Energy Law Symposium on “The Future of Energy”. The symposium, scheduled for March 23–24, 2017, will convene industry experts, academic commentators and public officials to discuss a wide range of issues bearing on anticipated needs, policy challenges and proposed reforms in the U.S. and global energy markets. Panel, debate and keynote sessions will address legislative and regulatory priorities, power generation, allocation wells, transboundary resource management, environmental considerations, bankruptcy and much more. Please join us as we explore “The Future of Energy”. Registration is $50 or $150  if you want CLE credit (12.75 CLE credit hours pending approval).

END_OF_DOCUMENT_TOKEN_TO_BE_REPLACED

The Texas 14th Court of Appeals recently decided the case an interesting case,  Clay Exploration, Inc. v. Santa Rosa Operating, LLC, concerning who has the right to execute oil and gas leases for unknown owners. In 1889 Frederick Kastan and Gustav Heye purchased 102 acres in Grimes County, Texas. Subsequently, Kastan left Texas and moved to Germany. In 1999, after conducting an unsuccessful effort to locate Kastan or his heirs, Marathon Oil petitioned a local court for a receiver to sign oil and gas leases for the 102 acres purchased by Kastan and Heye. Marathon’s petition requested that the receiver “take charge of and execute an oil, gas, and mineral lease, or leases” on behalf of unknown owners of the mineral rights, which included Kastan and his unknown heirs. This is pretty standard practice in Texas when an oil company can’t locate all the owners. The trial court appointed a receiver, Charles Ketchum, and ordered Ketchum to execute mineral leases with Marathon. The Marathon leases required Marathon to drill and produce within three to five years or the lease would expire.

Apparently the Marathon leases expired, and in 2011 two new oil companies, Clay Exploration, Inc. and Santa Rosa Operating, LLC decided they wanted to lease the 102 acres.  Santa Rosa petitioned a local court to appoint another receiver to lease the Kastan mineral rights. While the Santa Rosa petition was pending, Clay Exploration contacted the original receiver, Ketchum, who signed a lease with Clay in January 2012.

In April 2012 Santa Rosa intervened in the original Marathon receivership action, alleging that Ketchum had only been authorized to sign a lease with Marathon and no one else. Meanwhile, Santa Rosa located the unknown Kastan heirs and obtained leases directly from them. Santa Rosa filed a motion to set aside and invalidate the Clay leases on the grounds that Clay was aware that the Kastan heirs were no longer unknown and that Ketchum was authorized to sign a lease only with Marathon.” Santa Rosa also alleged that Marathon never drilled or operated on the tracts, although there was apparently no evidence on this. In response, Clay filed a motion to confirm the lease they signed with Ketchum.

END_OF_DOCUMENT_TOKEN_TO_BE_REPLACED

In September 2015, the Texas Governor signed into law Texas Senate Bill 478 , which adds  Section 22.019 to Chapter 22, Subchapter A, of the Government Code. The new law reads as follows:

Sec. 22.019. PROMULGATION OF CERTAIN LANDLORD-TENANT FORMS. (a) The supreme court shall, as the court finds appropriate, promulgate forms for use by individuals representing themselves in residential landlord-tenant matters and instructions for the proper use of each form or set of forms.

(b) The forms and instructions must:

END_OF_DOCUMENT_TOKEN_TO_BE_REPLACED 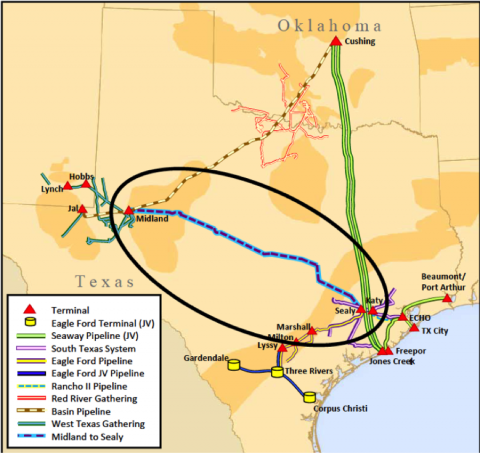 The unnamed pipeline will have a capacity of 540 million barrels per day and is expected to come on line in the second quarter of 2017. The new pipeline will be capable of segregated transport and used to transport four different grades of crude: West Texas Sour, West Texas Intermediate, Light West Texas Intermediate, and condensate. The pipeline will be fed by both tanker trucks and pipelines that currently terminate at the Midland Hub. A map of the currently proposed pipeline which was presented in an Enterprise Product Partners presentation is shown to the right.

If you live in one of the counties through which this pipeline will be installed, you may be getting a call from a land man representing Enterprise. Keep in mind that there are many legal and safety issues involved in having a pipeline installed across your property. In addition, there is no such thing as a “standard pipeline easement form”despite what the land man may tell you. You and your property are best served by seeking the input of an experienced Texas oil and gas pipeline attorney to assist you in evaluating the easement offer and in getting just compensation for the easement.

There has been an ongoing debate about whether hydraulic fracturing activities for producing oil and gas have an impact on drinking water supplies near and around the fracing site. Recently, the United States Environmental Protection Agency’s (EPA) Science Advisory Board (SAB) raised a number of questions concerning the EPA’s June 2015 draft report on the potential impacts of hydraulic fracing on drinking water supplies.

The SAB prepared a 180-page peer-review report that you can read here addressing the EPA’s 2015 draft report. The SAB found a number of aspects of the EPA’s draft report to be critically deficient. Below is an overview of some of the the SAB’s report’s findings. In particular, the SAB noted that:

END_OF_DOCUMENT_TOKEN_TO_BE_REPLACED

As the Texas Supreme Court noted recently, it is the responsibility of mineral owners to review their deeds carefully to ensure that the rights and reservations in the deed are what they intend and that there are no mistakes. Specifically, in Cosgrove v. Cade, the Court held that “Plainly obvious and material omissions in an unambiguous deed charge the parties to the deed with irrebuttable notice (of any errors) for statute of limitations purposes”. As a result, the “discovery rule” does not apply to a suit to reform the deed according to both Texas common law and the Texas recording statute.

In 2006, the Cades sold two acres of land to Barbara Cosgrove. The real estate contract provided for the reservation of all of the mineral rights to the Cades. However, the deed conveyed the land in fee simple, meaning all the land and rights incidental to ownership of the land, including mineral rights, were conveyed to the buyer. At closing of the transaction, the parties signed a document in which they agreed to correct or adjust any errors or omissions in any documents.

In 2010 the Cades realized that the deed conveyed their mineral rights to Ms. Cosgrove. The Cades filed a lawsuit to reform the deed and for breach of contract.

END_OF_DOCUMENT_TOKEN_TO_BE_REPLACED

Fracing, or hydrofracturing, is a natural gas extraction technique by which a liquid solution (primarily made up of water) is pumped into the ground at high pressures to fracture rock formations. Fracturing the rock releases gas that is trapped inside the rock formation. The geological areas where natural gas is found, and thus where a majority of fracing occurs, is in shale.

By the way, folks in the oil and gas industry call it “fracing”. The mainstream media somehow started adding a “k”, but the correct term is still “fracing” (i.e., there is no “k” in hydraulic fracturing)

Fracing is actually an old technique and has been used for many decades. Once fracing was combined with horizontal drilling, however, oil and gas companies found they could extract far more natural gas, more efficiently, than before.

END_OF_DOCUMENT_TOKEN_TO_BE_REPLACED

Earlier this year, Texas House Bill 1683 went into effect and required the Texas Secretary of State to assign a notary identification number for all notaries and required notaries’ seals to include that number. Unfortunately, the statute was unclear on whether the law only applied to notaries who were commissioned or recommissioned after January 1, 2016 or to all notaries. The Secretary of State took the position that the law only applied to notaries who were commissioned or recommissioned on or after January 1, 2016, and that existing notaries did not have to get new seals under the new rules but would have to obtain a new seal that is compliance with the new rules once their current commission expires. This meant that under the law some notaries would have seals that include their notary identification number while others would not until their commission expired and they request renewal of their commission.

There is case law in Texas that suggests that a notary seal that is not in compliance with the notary seal rules is not a valid seal, and that an invalid seal when contested or challenged is considered to be no seal at all. This could raise serious legal issues concerning wills, trusts, oil and gas leases and any real estate document where the notary used a seal without their identification number on it.