The United States Energy Information Administration (EIA) recently issued a report that in September 2019 the United States exported more crude oil and petroleum products than it imported. This is the first month in the history of recorded data (since 1949) that exports have exceeded imports. Specifically, 8.76 million barrels were exported from the U. S. during that month, surpassing the 8.6 million barrels that were imported. The report also indicated that the EIA expects the U. S. to be a net exporter of crude oil and petroleum products through 2020 as well.

Much of this increase is due to the energetic production in the Texas Permian basin and Eagle Ford Shale. Abundant production has significant national security implications. When we are producing enough of our own oil and gas, we are less dependent on the vagaries of foreign governments, such as OPEC. Some of us are old enough to remember when the OPEC manipulations caused gas shortages in the United States and long lines at service stations.

On December 5, 2019 the Texas Supreme Court is hearing the case of Southwestern Electric Power Co. v. Kenneth Lynch et al., 581 S.W.3d 292, (Tex.Civ.App.- Texarkana, 2018 error granted), which involves the challenge by several Texas landowners in Bowie County to Southwestern Electric Power’s (“SWEPCO”) claim that it can unilaterally enlarge the width of an easement on their property.

These easements were for electric lines and were signed with the original landowners in 1949. The pertinent part of each easement reads as follows:

[A]n easement or right-of-way [is granted to Southwestern Gas & Electric Company] for an electric transmission and distributing line, consisting of variable numbers of wires, and all necessary or desirable appurtenances (including towers or poles made of wood, metal or other materials, telephone and telegraph wires, props and guys), at or near the location and along the general course now located and staked out by the said Company over, across and upon the following described lands . . . .

END_OF_DOCUMENT_TOKEN_TO_BE_REPLACED

Recently, the U.S. Geological Survey published a new assessment of oil and gas reserves in the Permian Basin in Texas and New Mexico. The assessment, that you can read here, reports undiscovered, technically recoverable, continuous mean resources of 46.3 billion barrels of oil and 281 trillion cubic feet of gas in the Wolfcamp shale and Bone Spring Formation of the Delaware Basin in the Permian Basin Province, southeast New Mexico and west Texas. This means these reserves are the largest in the world. 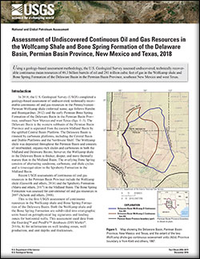 At the end of 2017, total reserves in the United States were estimated to be 40 billion barrels of crude oil and 465 trillion cubic feet of natural gas. This new assessment therefore reflects a doubling of U.S. crude reserves and a 65% increase in gas reserves.

As these reserves are produced, the economy will benefit in several ways. Mineral owners will be paid royalties. New employees will be hired by oil companies. Tax revenues to local, state and the federal government will increase.

END_OF_DOCUMENT_TOKEN_TO_BE_REPLACED

The royalty owners/lessors were attempting to obtain class-action certification. As part of their evidence, they showed that Devon sold the gas produced from their wells to a Devon affiliate for a price of 82.5% of the published industry index value of the residue gas and natural gas liquids. The evidence also showed that payment was never made by Devon to its affiliate. In addition, the affiliate “charged” Devon 17.5% of the value of the gas as a processing fee which was claimed to be substantially higher than the current market rate for processing gas. Again, no money actually changed hands between Devon and its affiliate. The royalty owners claimed that this was a sham transaction that resulted in their receiving lower royalty payments than they would have had Devon paid the market price for the gas produced from their wells.

END_OF_DOCUMENT_TOKEN_TO_BE_REPLACED

A recent case from the Texas Court of Appeals in Waco held that the Texas Statute of Frauds — Tex. Bus. & Com. Code, § 26.01 — rendered a land man’s commission contract unenforceable. The Court also upheld the trial court’s determination that none of the exceptions to the Statute of Frauds applied. The case is Moore v. Bearkat Energy Partners, LLC, 2018 WL 6837542018 (Tex.Civ. App.- Waco, no writ). Land man Moore had an agreement where he was supposed to be paid $600.00 per mineral acre for each and every lease he helped obtain for Bearkat Energy. Moore claims he performed and sued when he did not get paid. He claimed $1 million in damages and asked for $10 million in punitive damages. As noted, Moore lost on summary judgment at the trial level and received nothing. The Court of Appeals affirmed. Although the result may sound harsh, Moore could not meet any of the exceptions to the Statute of Frauds such as the partial or full-performance exceptions.

Texas Statute of Frauds and Exceptions

In general, Texas law requires that certain types of contracts be in writing. Examples include:

END_OF_DOCUMENT_TOKEN_TO_BE_REPLACED

As many Texas landowners are aware, oil and gas pipelines are being constructed at an almost frantic pace these days. The first time a landowner is aware that they may be asked to sign a pipeline easement is a call from a land man or right-of-way agent requesting permission to conduct a survey on their property.

Many landowners simply give verbal permission or sign the one paragraph form offered to them by the land man or agent. That can be a mistake. If you’re interested in protecting your property, you should consider using an appropriate survey permit to govern the pipeline company’s surveying activities on your property. That is even more true for geophysical or seismic permits.

A pipeline permit should address at least the following issues:

END_OF_DOCUMENT_TOKEN_TO_BE_REPLACED

On the other hand, the Texas oil and gas  industry is constantly grappling with environmental concerns and the threat of even more regulation of their activities by the Texas Railroad Commission and the federal Environmental Protection Agency. The oil and gas industry is already highly regulated, and yet state and federal government agencies consistently add more regulations on top of those that already exist. One of the recent set of regulations that the industry is facing are rules issued by the EPA concerning reducing methane emissions.

The reasons behind state and federal regulations are often good ones, for instance, concerns about air quality. On the other hand, some regulations are too far-reaching and overly aggressive. For example, where regulations require the adaptation of new technology designed to be cleaner and more environmentally conscious, the high cost of implementing those regulations can force smaller oil and gas producers out of business. That means fewer jobs and a decrease in taxes on oil and gas production that are paid to local governments. Another problem, with federal regulations in particular, is that they are often based on faulty (and sometimes nonexistent) science and take a one-size fits all approach that does not take into account local conditions, technologies and regulations. We end up with a mess!

END_OF_DOCUMENT_TOKEN_TO_BE_REPLACED

Environmental groups in a number of states are pushing for ballot initiatives to ban or limit drilling for oil and gas. Most reasonable people, and I believe many oil and gas companies, agree that regulations are appropriate, especially for drilling in environmentally sensitive areas or near residential developments. But few people proposing outright bans or overly restrictive regulation discuss or even acknowledge the unintended consequences of such a course of action.

For one thing, many people do not realize that the vast majority of mineral owners are just regular individuals, some of whom depend on royalty income for retirement. A drilling ban or overly restrictive regulation can deprive some people of much needed income. Are the proponents of drilling bans prepared to replace that income or to pay additional taxes to support welfare payments to those people who need their royalties so they can pay their rent and eat?

Secondly, according to the U S and state constitutions and the legal principle of inverse condemnation,  if government regulation deprives someone of their property, then the government is required to pay the owner the market value of that property. Individuals in this country own billions of dollars worth of mineral interests. A recent study in Colorado estimated the value of unproduced oil and royalties to mineral owners in that state to be $26 billion. Are taxpayers ready for higher taxes when their local or state government has to start paying these claims?

END_OF_DOCUMENT_TOKEN_TO_BE_REPLACED

In two recent cases, the Texas Supreme Court reviewed what are called “retained acreage” clauses in gas and oil leases. Consistent with recent precedent, the Court instructs that these clauses are to be interpreted based on the language used and that the intent of the parties is to be the guiding principle.

In Endeavor Energy Resources, L.P. v. Discovery Operating Inc., the conflict involved the interpretation of so-called “retained acreage” clauses where the parties intended the retained-acreage definition to be based on the plats filed with the Texas Railroad Commission (“RRC”). The Court also decided a companion case,  XOG Operating LLC v. Chesapeake Exploration LP, that came to a different conclusion. The difference between the cases hinges on the language in the leases. We will discuss XOG separately.

END_OF_DOCUMENT_TOKEN_TO_BE_REPLACED

In the case of ConocoPhillips Co. v. Koopmann the Texas Supreme Court held that the Rule Against Perpetuities (“the Rule”) did not void a 15-year non-participating royalty interest that was reserved in a deed. In doing so, the Court changed the way the Rule applies to oil and gas deeds.

The Rule is a complicated legal subject and this case makes significant changes in how the Rule applies in Texas. Note that the Supreme Court explicitly limited the holding of this case to “future interests in the oil and gas context.” The case is significant for these reasons: